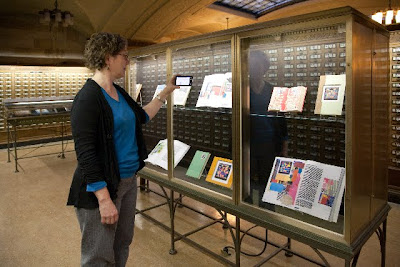 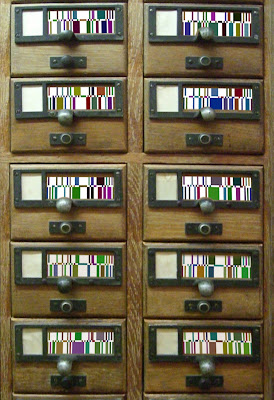 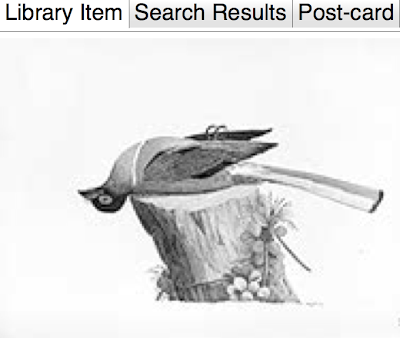 Augmented/Obstructed playfully intertwines the physical with the digital, resulting in a reactivated card catalogue room that is enhanced through the medium of machine vision. Artists Andy Deck and Carol Padberg explore the nuances of augmented reality in their first ever collaboration. Incomprehensible to the human gaze, but perceptible with the assistance of software, the designs of commerce and culture combine in the form of reinvented card catalogue labels, altered books, and an ancient Babylonian clay tablet. Referencing key moments in the history of language and technology, the work invites viewers to consider the consequences of our cultural journey from clay tablets and the printing press to digital tablets and the Internet. Using a poetic and yet industrialized visual language, the artists probe questions of intellectual property, authorship, the public domain, and access to knowledge. Augmented or obstructed? It's not all in the eye of the beholder.

Carol Padberg creates work that integrate digital technology with tactile studio practices such as textile forms, collage strategies, and painting and drawing. Recent solo shows include the New Britain Museum of American Art (New/Now: Interactive Crazy Quilts, 2011) and La Cova in Barcelona, Spain (Woven Code, 2010). Other venues include Real Art Ways In Hartford, Connecticut; the Kathryn Markel Gallery in New York; the Minneapolis Institute of Arts; the Living Art Museum, Reykjavik, Iceland; Kunstlerhaus, Hamburg, Germany; and Gallery Woong in Seoul, South Korea. Carol Padberg is part of Jen Bekman’s project 20x200 in New York. She has been awarded a Skowhegan Fellowship, grants from the Minnesota State Arts Board, and an Individual Artist Fellowship from the Greater Hartford Arts Council, as well as numerous residencies. Carol Padberg has been a visiting lecturer at the Foundation for Contemporary Art in Accra, Ghana, the Walker Art Center in Minneapolis, the Maryland Institute College of Art in Baltimore, and the University of Connecticut, Storrs. She is an Associate Professor at the Hartford Art School, University of Hartford.

Andy Deck is an artist specializing in art that is interactive and accessible via the Internet. His work addresses the politics and aesthetics of collaboration, interactivity, software, and independent media. At his website ARTCONTEXT.NET, Deck combines code, text, and image to demonstrate new patterns of participation and control that distinguish online presence and representation from previous artistic practices. He is a co-founder of Transnational Temps, an arts collective concerned with making Earth Art for the 21st Century. Deck's works have been shown in numerous online exhibitions and at venues such as the Museum of Contemporary Art, Barcelona; Machida City Museum, Tokyo; Moving Image Gallery, NYC; MediaNoche, NYC; HTTP Gallery, London; Postmaster's Gallery, NYC; Location 1, NYC; Mejan Labs, Stockholm; Plato Sanat, Istanbul; Wood Street Gallery, Pittsburgh. Notable exhibitions include net_condition (ZKM), Let's Entertain (Walker Art Center), Unleashed Devices (Watermans Art Centre), and Animations (PS1-MoMA). Deck’s work has been awarded prizes and mentioned in various contexts, including Prix Ars Electronica, the Webby Awards, VIDA 4.0, the Biennial of Ibiza, and the Web Biennial of Istanbul. In 2011 his work received first prize in the interactive division of the LÚMEN_EX Digital Art Awards. His work has been commissioned by the Whitney Museum of American Art and the Tate Online. In 2012 Deck begins work on his third Turbulence.org commission. He lives and works in New York City.