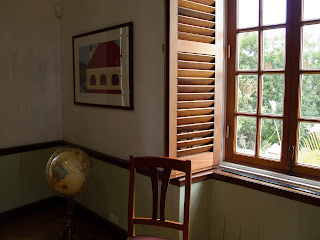 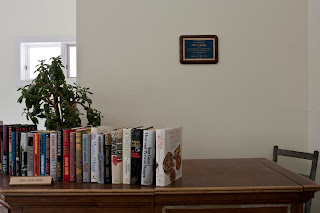 Organized in association with Library Science, Meredith Miller and Rob Rocke present little libraries, a series of photographs taken in rural communities in the Catskills and New England that focus on the well-worn details of libraries such as plaques, children’s corners with stuffed animals or photographs that celebrate the towns in their heyday and honor local heroes.

The public library is a fixture even in the smallest hamlets and towns in America. Sometimes it’s an old building, other times, a re-purposed storefront. It can seem far removed from the slick online technologies of the 21st century. Of course, there are always books—lots and lots of books. But among its well-worn carpets and faded signs there are also plaques and certificates recognizing local heroes, historic photographs of the town in its heyday, genealogy archives, and children’s corners with beanbag chairs and worn stuffed animals.

Despite its vintage appearance, not all is old-fashioned. You see literature  on contemporary regional issues. Sometimes the library provides the only free Internet in town. And for some, it may be the only source of contemporary entertainment and educational media, as free rentals of DVDs and CDs have replaced—or at least coexist with—VHS tapes and audio cassettes.
Meredith and Rob have become enamored of the public library, especially the small town libraries they encounter during their travels. Public libraries promote a sense of shared identity. They provide access not only to books, but also to social and cultural programs. They are a resource for job seekers. You can access many of their services even without a library card. In the end, public libraries are one of the few places where we are all equal.

_____
Meredith Miller lives and works in New Haven, Connecticut. She received her undergraduate degree in Visual Art from the University of Chicago before earning an MFA in photography from Yale School of Art, where she also won the Blair Dickinson Memorial Prize. She received an artist's fellowship from the Connecticut Commission on Culture and Tourism in 2006. Meredith's work has been exhibited in group exhibitions throughout New England as well as in New York and in California. Her photographs are included in the collections of the Danforth Museum of Art and the Yale Art Gallery. She has attended artist residencies at the Vermont Studio Center, the Artist's Enclave at I-Park, and Wilson College. She currently works as a photographer at Yale Beinecke Rare Book and Manuscript Library and teaches digital photography at Southern Connecticut State University.
Before seriously pursuing photography, Rob Rocke was working on a Ph.D. in Music Theory at Yale University. While at Yale, he studied black and white darkroom photography with Harold Shapiro at the Creative Arts Workshop in New Haven and color darkroom photography with David Hilliard at Yale. His recent exhibitions include "Just Look at Yourself," at the Center for Maine Contemporary Art in Rockport, Maine (2009) and "Self-Evident," at Morehead State University in Morehead, Kentucky (2007). Rob recently attended an artist residence in upstate New York through the Catskill Center for Conservation and Development. His upcoming exhibitions include the "Biannual Artist in Residence Exhibition" at the Erpf Gallery in Arkville, New York (2011) and "Our Daily Rite," at Artspace in New Haven, Connecticut (2012).
Founded in 1826, The Institute Library is Connecticut's oldest living independent literary institution and one of the last remaining membership libraries in North America.
The Institute Library
847 Chapel Street
(203) 562-4045
Hours: Monday-Friday, 10am-6pm; Saturday, 11am-2pm
EXHIBITION 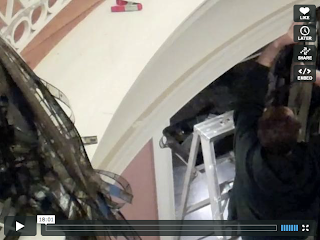